What do they call the age we live in? Post-truth era? Although I find this concept very valuable, I will not use it in this article because I am so full of anger that I can not leave any room for academic style. Instead, I will call this age, our age, when the power of lies suppresses the truth, the age of hypocrisy.

Again, we are passing through the days that prove that perception management is everything. The war between Russia and Ukraine is getting worse in the media and cultural arena, perhaps even more so than at the battlefield. So much so that the so-called Western civilization, that is, Europe and the United States of America, is attacking the most prominent figures of Russian culture with a terrible hypocrisy. The media, on the other hand, masks this cultural pogrom with a make-up of anti-war rhetoric. However, if you make too much make-up, all eyes would turn to you. This is what is happening now: Look at this civilization, we say, how ugly in reality it is!

First came the economic sanctions against Russia. This was expected and could be reasonable. But then, a strange wave of attacks began against innocent Russians: They kicked out sports clubs and athletes from their tournaments, and some restaurants in Europe put signs saying “Russians can’t enter!” on their entrances, TV series projects being developed in Russia or in which Russians were involved in some way were stopped, films by Russian directors were removed from festivals, a university in Italy even tried to cancel a Dostoevsky course… This wave of attacks, which I call a “cultural pogrom”, of course also hit the music industry… The masters of the culture industry, who didn’t speak out when Iraq was invaded or Libya and Yemen were bombed, targeted Russian musicians as if they were responsible for the war. They implemented the isolation policy towards Russia in the field of music as well. Our music scene will feel the negative effects of this cultural pogrom they implement today for many years.

Well, what kind of attacks have been made against the Russians in the music world in the past few days, and how did the Western culture industry suddenly remove its mask of WOKE it had been wearing for years? Let’s take a look at the process through concrete examples.

Valery Gergiev, Itzhak Perlman and the trivial lives of Palestinians

A report shocked the world press on March 1: The conductor of the Munich Philharmonic Orchestra, Valery Gergiev, was fired from his job for not condemning Russia’s attack on Ukraine. It was Dieter Reiter, the Mayor of Munich, who made the decision. Reiter, this very moral gentleman, gave Gergiev 24 hours to condemn the attack. In fact, he wanted to turn Gergiev into a PR weapon, as Gergiev was a longtime friend and supporter of Russian president Vladimir Putin. How nice it would be if a world-renowned chef, as well as Putin’s friend, condemned Russia’s attack! However, Gergiev did not accept to condemn Russia’s attack and was fired.

Of course, efforts to acquit this decision of the Mayor of Munich immediately began in classical music circles. According to them, there was no immorality or contradiction in this decision because Gergiev was no ordinary Russian chief – he was a friend of Putin. In fact, some music writers claimed that Gergiev got to where he is thanks to Putin. Well, if being Putin’s friend was a crime and Gergiev got to where he is thanks to Putin, did the Mayor of Munich just recently realize this? When putting Valery Gergiev as the head of the Munich Philharmonic Orchestra, Gergiev was not supporting Putin but suddenly started to support him last week? I and others have asked these questions on social media and other mediums, but of course, no answer came from the other side. As a matter of fact, the mayor explained the reason for Gergiev’s dismissal as his rejection to issue a condemnation statement; that is, his friendship with Putin was not in question. So what happened was a mayor forced an artist to say something he didn’t believe in.

When I tweeted about this issue, I learned that the hypocrisy and contradiction of the mayor of Munich were bigger than I thought. A young Turkish pianist, who objected to me, claimed that Gergiev was fired not because he didn’t condemn the occupation, but because he supported the occupation. There is no doubt that Gergiev supported the invasion because – as everybody knows – he is a staunch Putinist, but I had never seen any statement by him supporting Russia’s attack on Ukraine. Then our pianist sent me a link and said, “Here, you can find his supporting statement.” I took a look, what do I see; indeed, Gergiev made a supporting statement… But 8 years ago, about the annexation of Crimea! For some reason, the Europeans did not ‘cancel’ Gergiev when he openly supported the annexation of Crimea, but now he has fired from his job although the fact that he didn’t make a statement for supporting Russia’s attack. Every sane person can realize that the attitude of the classical music industry and the Mayor of Munich towards Gergiev has nothing to do with morality or conscience, even from this contradiction alone… But the hypocrisy does not end there. 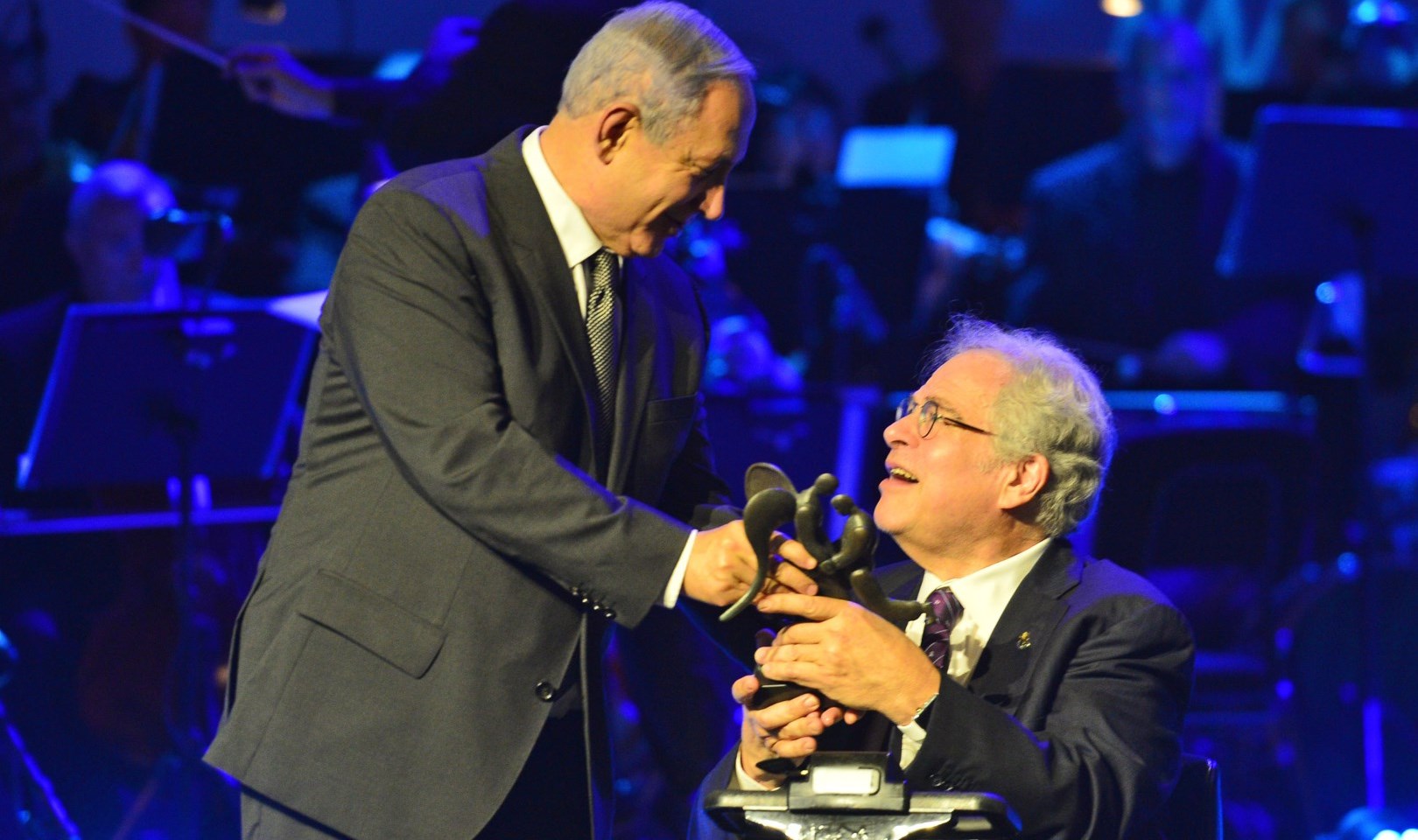 The photo above is dated June 23, 2016. In the photo, we see the legendary violin virtuoso Itzhak Perlman receiving an award from the then Israeli prime minister Benjamin Netanyahu. A year later, Perlman and Netanyahu would meet again. While these were happening, the aggression of the occupying Israeli state against the Palestinian people continued with all its violence. As you know, Israel has been occupying Palestinian lands for almost 70 years, resettling Israelis on the lands it cleared of Palestinians, and doing everything to cut off the connection between Palestine and the rest of the world. Well, have you ever heard that anyone in the classical music world protested Itzhak Perlman or that Perlman’s concerts were canceled? What is his privilege over Gergiev? While Gergiev was fired from his job for not condemning Russia’s attack, did Perlman ever condemn Israel’s 70-year-long occupation of Palestine? Or are the lives of Ukrainians more valuable than the lives of Palestinians?

…goes on. Before Gergiev’s dismissal, a report on the Zagreb Philharmonic was an announcement that the anti-Russian wave in Europe was going to turn into a cultural pogrom. According to the AFP, some Tchaikovsky pieces were removed from the repertoire of a concert to be performed by the Zagreb Philharmonic Orchestra on the evening of February 25, 2022. “In this way, we showed our solidarity with the Ukrainian people and artists,” said Mirko Both, the director of the orchestra. In other words, according to Mirko Both, it was a form of solidarity to ‘cancel’ one of the greatest composers in history, Pyotr Ilyich Tchaikovsky, whose works are among the great legacy of humanity. I don’t know if Tchaikovsky, who died in 1893, was a friend of Putin, but what liberal Europe understands by solidarity brings tears to my eyes. Putting the sin of war on Tchaikovsky’s shoulders! Meanwhile, the works of Richard Wagner, who had died as an anti-Semitic racist, continue to be played (fortunately) by orchestras all over the world.

The reports from Zagreb were not just that. A Russian serenades concert to be held on the evening of March 6 was also canceled. I wonder if any of the concerts of Plácido Domingo or Aretha Franklin, who didn’t mind getting a medal from George W. Bush, who bombed Baghdad and occupied Iraq for many years, were canceled? No. While both and many other important artists received the US Presidential Medal of Freedom from Bush and posed happily for the cameras together with, people in Baghdad died under American imperialism and were tortured in prisons. Today, the Guantanamo base, which is a disgrace to humanity, is still open, but no American musician’s concerts are canceled because he does not criticize the Guantanamo base.

…goes on. Nick Cave announced on March 1 that he has canceled his summer tour in Russia. Three years ago, when Brian Eno urged Nick Cave to cancel his concert in Israel, to boycott the occupying Israel, Nick Cave’s response was: “I do not support the current government in Israel, yet do not accept that my decision to play in the country is any kind of tacit support for that government’s policies.” Nick Cave added that such a reaction as a boycott was “cowardly and shameful”.

You won’t hear me but dear Nick Cave, how did you become such a cowardly and shameful man, as you put it? Dear Nick Cave, which you is real? I think Nick Cave who doesn’t want to lose the money from the Israel tour is real because the same Nick Cave knows very well that if he gives a concert in Russia now, many of his concerts in Europe and the USA would be canceled. The coins will disappear in an instant. As Napoleon said: Money, money money.

Bolshoi Ballet, you are not welcome in the UK

…goes on. The Royal Opera House of the United Kingdom has canceled the Bolshoi Ballet’s summer tour in the UK! Look at the irony of this world: The United Kingdom, the state that has occupied the north of Ireland for years, that was once the largest colonial empire in the world, that did not hesitate to massacre even non-violent resistance fighters in India, but always boasted about its own history, teaches the world a lesson in humanity.

The Bolshoi Ballet case is not the only example of the closure of the UK’s doors to Russian art. Bristol Hippodrome, Edinburgh Playhouse, Wolverhampton Grand Theater, New Peterborough Theater, and the Royal & Derngate in Northampton also canceled upcoming performances of the Russian State Ballet.

Where will this cultural pogrom lead?

I could extend this article a lot with other examples, but I’m tired of saying “Tragicomedy goes on”. Unfortunately, it does and will. Those who have been very sincere with the Russian oligarchs for years and now pretend that no country has invaded any other country before Russia will continue to reveal their fascist faces – which they have hidden under their so-called sensitivities for many years.

All this shows that the conscience masturbators, known as ‘SJW’ (Social Justice Warrior) are used as a tool to consolidate the dominance of the West in the cultural field. The culture industry, guided by the US and UK, is trying to clear a nation they see as an enemy from the music industry, with rhetorics that will appeal to everyone, such as conscience, morality, pacifism, and anti-war. That’s what I call a cultural pogrom. The exclusion of artists simply because they are Russian or because they think contrary to Western propaganda is part of this pogrom and Western fascism. Regardless of whether Russia is right or wrong and the suffering of Ukrainians, this is proof of the culture industry’s hypocrisy.

Let’s oppose war, expansionism, but also the attacks from the US, UK, Israel, and other imperialist states! Let’s question why Russia attacked Ukraine, but also how NATO provoked Ukraine! Most importantly, let’s fight against fascism, the cultural pogrom against Russian artists. Let’s at least raise our voices and make a note of history: Down with fascism, long live art!